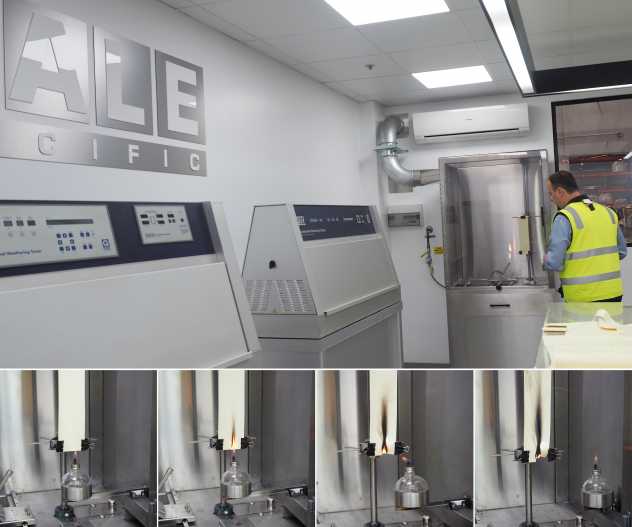 Following the tragedy in Grenfell, London, now more than ever construction materials used around the world are coming under strict scrutiny with how effectively they restrict the spread of flame.

This has become increasingly relevant for applications in open public spaces such as Schools, Playgrounds and Commercial Installations. In the United States, Federal regulations are progressively asking a Coated Fabrics used in such spaces be certified as flame or fire-retardant. It is expected that tighter regulations will also follow in Australia.

Within the US Market, Coated Fabrics used in public places are commonly tested to either NFPA701 or CSFM 1237.1. Although most Coated fabrics will eventually burn, some are more resistant to fire than others. Those that are more flammable can have their Fire Resistance improved by treatment with Fire-Retardant additives.

The two most commonly adapted FR Test Standards within Australia for Coated Fabrics are AS1530.2 and AS/NZS 1530.3. AS1530.2 is designed to represent a fixed flame in contact with a curtain or drape.

The test specimen is mounted on a vertical support frame. A small flame is used as an ignition source. Either the highest reach point of the flame during the test, or the time for the flame to reach a marked point is determined. The Speed Factor, Spread Factor, Heat Factor and Flammability Index are calculated.

The above video, filmed in GALE Pacific's testing laboratory, shows the behaviour of shade fabric when subjected to open flame. Testing conducted on both flame retardant and non flame retardant shade cloth.

Based on the Flammability Index, the material can be deemed to pass or fail to a relevant Australian Building Code – though within the context of most Coated Fabrics, there is no clear definition of what constitutes a PASS or FAIL.

It is important to note that through this test methodology, lightweight fabrics can provide very good Flammability Index data by shrinking away from the flame source – creating misleadingly low ratings.

AS/NZS1530.3 is designed to represent a radiant heater in close proximity to a curtain or drape.

Based on the calculated values the test material passes or fails the test – as dictated by relevant Building Code specifications. This test standard is a more severe standard for coated fabrics compared to AS1530.2.

Both AS1530.2 and AS/NZS1530.3 can be tested by the AWTA, who are based in Melbourne, Australia. Details on AWTA can be found on their website: http://www.awtaproducttesting.com.au/index.php